When the rain stopped, the furry monkeys came in my orphanage and they snatched the food.  The monkeys took the food to the top of the building. We hid away from the monkeys. I hid away in a room filled with cockroaches. The monkeys gave the food to their babies.

In Voices in the Park Charles gives Smudge a flower. She takes it home and puts it in a mug. 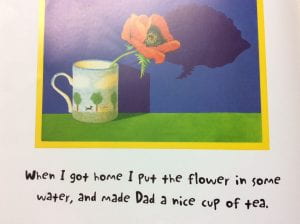 We designed our own mugs and wrote about them. 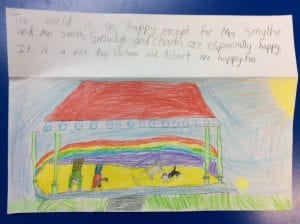 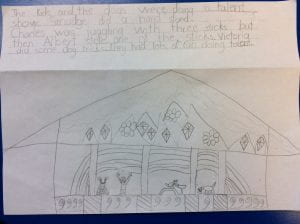 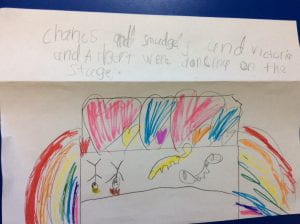 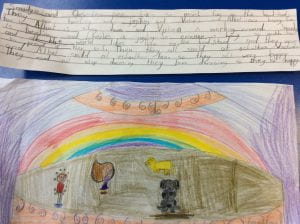 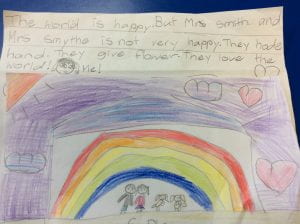 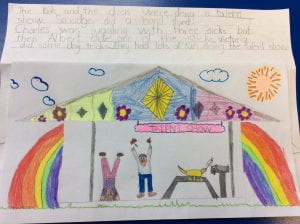 Next they got rolled into cylinders and put up on the wall. 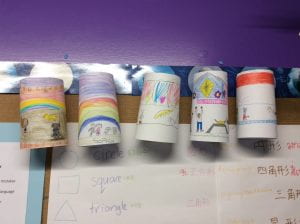 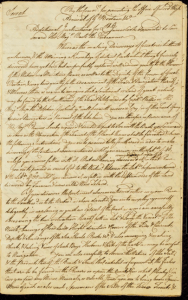 We talked about Cook’s secret mission to get land for Britain. Although it was written in his instructions that the inhabitants were children of God and to be treated with kindness, this was not the popular view of the day.

The Doctrine of Discovery justified the expansion of Christian empires and was used until very recently as an argument in courts of law.

We talked about the concept of ‘The Other” and whether someone being different justifies mistreatment.

Should we take things from “The Other”

No! Because they need their lands and it belongs to their country and don’t think if your skin’s white and other people’s faces are different than you, you don’t hit them because it’s the same people and you don’t say bad words to them.
-Emily

No! Because it’s not fair for other countries.
-Robin

No! Because they would have war and war is bad and it would be unfair.
-Guanyu

Yes! Because:
1/ I can take Chinese things like books or chairs or something.
2/ I can take New Zealand’s snacks.
(But we pay for them)
-Ha Eum Mok

No! Because people then would start war because they are angry at losing their land.
-Sebastian

No! Because it’s not nice and it’s rude and they will start a fight and “The Other” will be angry.
-Milyn

No! Because it is very rude and it will start a war. They will never be their friends and they will never see them again.
Maliepō

We talked about the meaning of the word ‘discovery’ in relation to Captain Cook ‘discovering’ things around the Pacific.

Here are some of our ideas about this.

No! Because it’s not Tera Nullius. Terra Nullius means no-one is there.
-Robin

No because he went to New Zealand, Australia and many countries. Captain Cook couldn’t discover countries because there were many people in the countries.
-Emily

Captain Cook discovered all of the continents except for the south continent that was Australia and New Zealand. But one day he found those two lands and he claimed them for Britain.
-Sebastian

Yes. He went to New Zealand and South Africa and Tonga and that’s how he went to places and the people told him to ask people for land or, if people are not giving a piece of land, they have it for themselves.
-Milyn

One of the groups is exploring the Anthony Browne books A Walk in the Park and Voices in the Park. 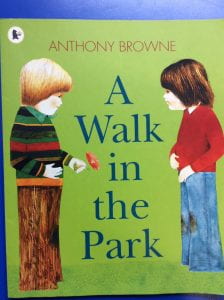 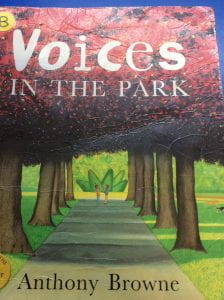 Smudge sees the world as a beautiful and exciting place. We thought about what she would see if she looked at our school. 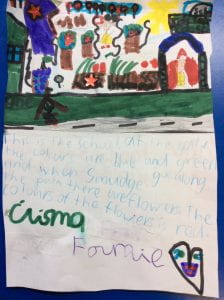 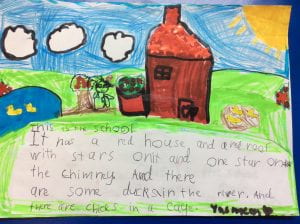 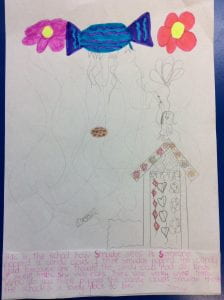 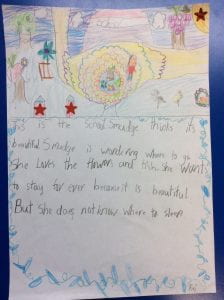 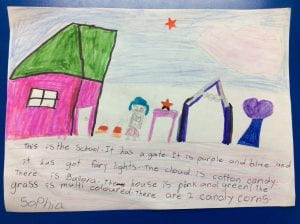 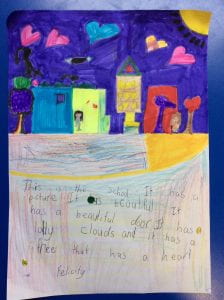 We watched a video by Dwarven Lego on the death of Captain Cook.

Here are our retellings of what happened.

Captain Cook needed to go back to Hawaii because his boat’s foremast broke. The natives thought he was a god. The gathered materials to fix the foremast. But two natives stole a long boat and rowed it away.Captain Cook and his crew went to kill the chief. He kidnapped the chief. The natives fought his crew. Captain Cook was killed and he was ripped in to pieces and his bones were cooked.   – Robin

In February, 1779, he broke the foremast. It broke so he returned to Hawaii and the Hawaiian people thought he was the god so they fixed the foremast but then they stole a boat from Cook so he kidnapped the chief then a war came and I hate him.
– Maliepō

Captain Cook spent his three voyages seeming to think that kidnap was a good form of diplomacy. It is hard to say whether it would have been better or worse to have gone for a frontal attack, or retreated, when things went wrong.
We talked about what we would have done if we were Captain Cook. We thought about whether we would have looked strong or weak and if that would have been important.

If I were Captain Cook I would shoot them in the head and I would throw their heads out of the boat. I would take a knife and push it in the person’s head. Then I would take my boat.  – Milyn

If I were Captain Cook I would buy four strong dogs and I would tell the others to go back  and I would go to the mountain and I would throw rocks. The would fall down and they would die. If they come up my dogs would bite them.  – Guanyu

If I were Captain Cook I would be friends with the natives. I would give them something to fight their enemies like guns, spears, swords and knives. I would get the ship back because they are my friends.  – Robin

If I were Captain Cook I would go up to them then I would hide the gun and go to the boat and shoot one then take a knife and stab them because if they are too fast they will stab me. That is why I will have a knife and gun but it is so stupid to fight.
– Sebastian

If I were Captain Cook I would not kill people for a dumb boat. I would make another.
– Maliepō

We talked about the death of Cook and how Charles Clerke tried to get his bones back.
Clerke negotiated instead of kidnapping people to swap for what he wanted.
He didn’t seem to want the bodies of the five marines, just of Cook.

Cook’s body had been ceremoniously burnt and de-fleshed. His bones were prepared according to the Hawaiian tradition for people of great mana. Meanwhile, the British wanted to extend the same rights to him in their tradition. On the sad trip home, the men made a tiny coffin for his widow. A bit of his hair was put inside so she could have something of him to mourn over. 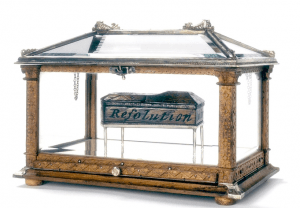 Here is more about this.

How do we look after the dead in our cultures?

A long time ago we burnt them. Sometimes we still do in some parts of China.
We will put them on a big coffin and carry them to a mountain and bury them.
Once a year, on the day they died, we go up the mountain and we put food and paper money and burn them so they  can have it in heaven.

We burn them or put them in a coffin and bury them. We go to the church to pray and to say good bye.

If someone is dead we celebrate them. We pray for them. We say, “Please go to Heaven.” If they don’t go to church we don’t pray for them because they don’t believe in God. We give their family money to help them. On the person’s death day, we pray to them. We bow to them. We also bow to them on their birthday. We put food on the table for them (then we eat it ourselves). We throw wine on the grave (if they liked wine). 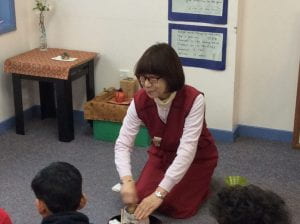 Mrs Sakaguchi, Mrs Itagaki and Mrs Sato have been visiting our school. They have been teaching the school about the Japanese tea ceremony.

Many countries have tea ceremonies. We thought about the ones from our countries.

We answered three questions:
* When do we have tea ceremonies?
* Why do we drink tea?
* How do we drink it?

In Korea we drink tea any time. We just drink hot tea in winter and cold tea in summer like that!
Maybe I don’t like all the tea. I drink not all but I maybe drink 2 or 3 and I don’t like all of my tea.
-Ha Eum

When: Any time; happy, sad, mad, annoyed and cold.
Why: Because it can keep us warm.
How: We get it up and drink it.
– Robin

Tea is the substance that balms our lives.
We have a simple tea ceremony many times a day. We share with our family and friends in an informal way. We share with visitors in a more formal way – perhaps with cups and saucers and with biscuits or cakes instead of in a mug.
We do it because it is a way of connecting with people and a way of keeping our bodies working.
In New Zealand we drink black tea, often with milk and sugar.
-Ms Finikin

Ms Finikin was telling us about her trip to Hamilton Zoo during the last holidays.
One of our group mates was so angry about the visit. He went home and wrote about why zoos are bad.

We looked at the picture of the statue of Crook Cook. 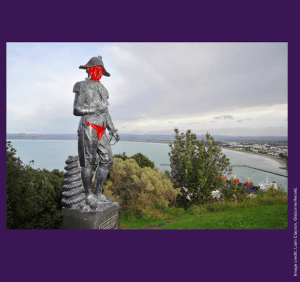 We talked about the statue and about Captain Cook.
For homework we went home and found out about him.

“Who was Captain Cook?”

‘He was a sailor but then he got cooked because he was trying to steal one of the chiefs, so his name is Captain Cook.’ – Maliepō

‘People though Captain Cook was his name because he got cooked.’ – Milyn & Ilienke

‘Captain Cook is a man that shaped NZ. He killed 21 Hawaiian people’ – Robin

‘Captain is who found New Zealand and who drew New Zealand on a map. Also, Captain Cook was a killer. He killed 21 Hawaiians and 5 British’ – Emily

‘Captain Cook was a sailor and an explorer. He discovered New Zealand and Australia. He began sailing when he was 18 years old. He joined the Royal Navy in June 1755. Soon Captain Cook became one of the best navigators and map makers in Britain and was asked to explore new parts of the ocean to find land for Britain to take.’ – Sebastian

We will continue learning as we journey towards Tuia 250.

A great way to learn more is through Future Learn

Powered by WordPress | Hosted by Edublogs | Protected by CloudFlare